“Persephone/Tiffany” was a durational performance exploring the power dynamic between Hades and Persephone as part of Over/Under Limbo Lab a performance art event curated by Baltimore performance laboratory, LABBODIES. Persephone’s banishment to Hades was retold as violent argument between the two over an elegant dinner. The feast itself consisted of animal organs and a pig's head enshrined in flowers, beads, cutlery, bones  and other magical objects. Thesmophoria was an ancient Greek festival honoring of the goddess Demeter and her daughter Persephone. A ritual of the ceremony involved burying a sacrificial pig into the earth by night and unburying the decaying remains of the pig sacrificed the previous year to commemorate Persephone’s banishment to Hades. The rituals were exclusive and secretive. I saw the exclusive and mysterious nature of this ritual as one of the first examples of a Queer Safe Space. “Persephone/Tiffany” was the Thesmophoric ritual obfuscated into performance art. The audience witnessed me moving from one side of the diner table to the other, climbing over the enshrined pig’s head shifting personas from Hades to Persephone. Hades emerged as a strict, virile male energy in a black suit.  Persephone was more wild and androgynous, performing vulgar erotic gestures wearing nothing but (at times) a faux-fur coat. I began the ritual performing the dining etiquette described in Tiffany's Table Manners for Teenagers. Blindfolded, grabbing forks to pantomime eat an elegant meal the gestures would trigger a trance like state that would allow me to transform back-and-fourth from Hades to Persephone. Persephone’s role was to destroy social expectation rules of the body. Interacting erotically with the pig head, and catching the gaze of people in the space, I became the protest and outrage of Persephone. Hades intention was to subdue the outbursts and dominate the wild Persephone. The dinner battle between two characters allowed me to embody the tension and pain of Persephone’s circumstance, and Hades oppressive demands. Although Hades wins in the end, the residue of the ritual can resonate far beyond the initial performance. Its empowers me, the audience, and the pig with a sense of confidence and regarding the critique and protest of social norms. 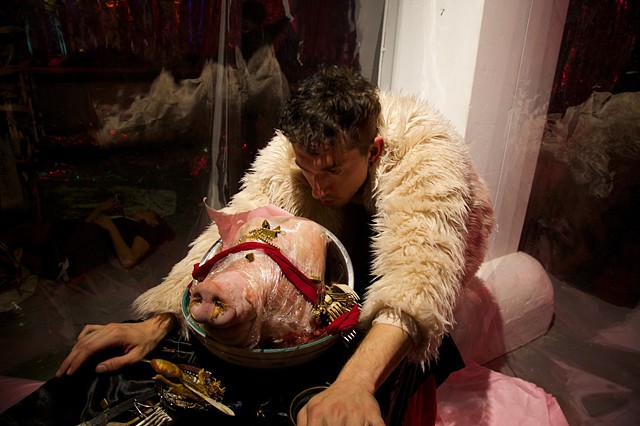 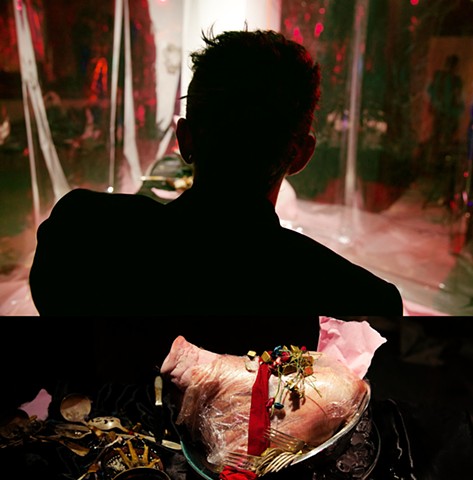 Hades and the Sacrifice
Photo by Andrew Keipern 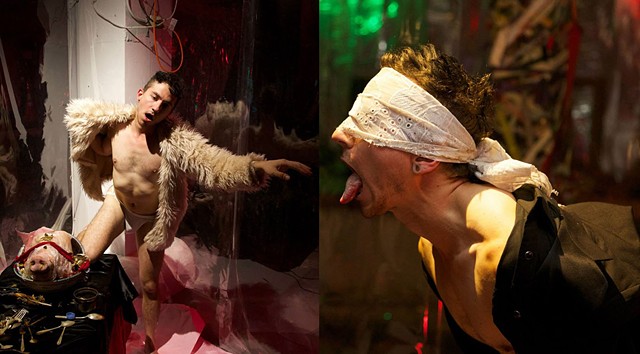